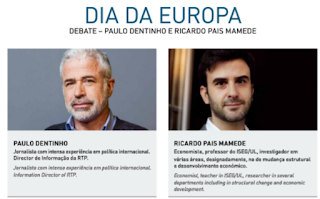 Yesterday I went to the debate devoted to the Day of Europe at Teatro Lethes (see p. 46 of their Agenda), with Paulo Dentinho and Ricardo Pais Mamede as panelists. Unfortunately, public participation in the debate got limited to the personal friends of the moderator (person different from that announced in the Agenda), therefore I could not contribute. Both panelists were mildly critical of the EU institutions and of the single European currency, getting some applause, though following the national elites in promoting no action at all on either of these issues. The most important opinions expressed may be summed up as "EU has been fundamental in keeping peace in Europe since WWII", "we are better in EU than out", "we may get out of the single currency, by the decision of others" and "any significant changes in European institutions may only be initiated by Germany".
Importantly, both panelists proudly contribute to the mediatic environment that generates the tide of fake news, modeling the public conscience into acceptance of all of the policies promoted by the EU industries. Apparently they have brainwashed themselves as well, condemned to thinking-inside-the-box.
This begs some questions, which I will limit to information and economics, the areas of the professional activity of the panelists. Mr. Donald Trump, the President of the United States, the stalwart of democracy and the country that is providing for the defence of the EU, told us that Reuters has been the main generator of fake news in his respect. This is obviously true, as may be easily verified by consulting the video records of his speeches that Reuters has been deliberately distorting. Has RTP admitted its errors in citing Reuters? Is Mr Dentinho, the director of Information at RTP, planning to do some actual journalism instead of translating Reuters fake news? Will Portuguese public ever receive the news service it is paying for?
The economic ideas of Mr Mamede are quite naive, as he fails to understand the very notion of money. The absurdity of the single currency in the system with many different economies with their specific national tax legislations goes far beyond the fact that economic competitiveness may require different price of money in different economies, gravely affecting the weaker economies that have no say in the matter. Indeed, Lenin wrote already 100 years ago that it is the international capital who will be profiting from the united Europe. Mr Memede, while mentioning Piketty who demonstrated the accumulation of capital predicted by Marx, refuses to recognise that the primary problem of the EU single currency lies in the very nature of capitalism. Thus, the single currency is used by the capital as a profit-making tool, starting from the member states having to borrow money from private banks in order to finance their current activities. Will Mr Mamede ever attempt to think out of his comfortable box?
Posted by Igor Khmelinskii at 8:55 AM

Why should we respect faith?

The Importance of Being Sceptical

Where is the climate going: Solar activity prediction

Over 30 years ago, the current solar cycle had been predicted to be much weaker than the previous (Theodor Landscheidt ), and it is going to be weak. The next solar cycle will be still weaker. Our Sun is cooling down - we are on our way to a Grand Solar Minimum.

Please see the plot with "seasonal signals retained on their page - they have no permanent link to that plot. We expect the sea level to start dropping by 2020 (as of 2012/10/12).